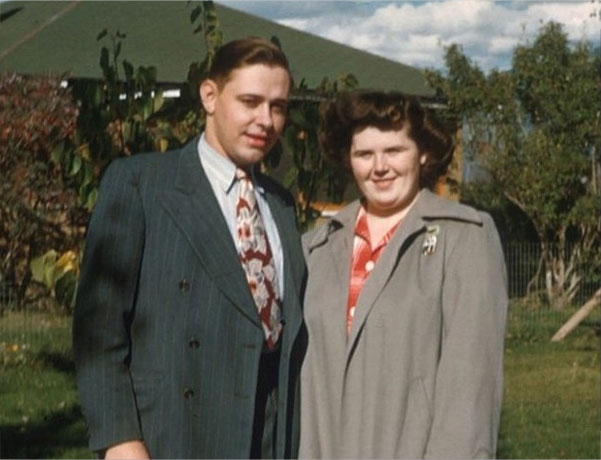 In 1955, a young minister and his beautiful young bride rowed across Lake Mary Ronan…

Well, actually SHE rowed while he fished. I believe the word “trolling” was mentioned.

Whatever fish were (or weren’t) caught on that outing are long gone. But that young couple, Bob and Nancy Larsson of Saint Ignatius, Montana, landed something else that day that is still with us now- the site of Kootenai Christian Camp.

Camp in the early years at Kootenai Christian Camp was a lot different compared to today. First, there was the brush. It was everywhere! For a few years, the location of the nightly campfire at camp moved slowly down the shore reflecting the portions of the campground that had been cleared. Even today, brush must be trimmed periodically to maintain a neat appearance in the campground.

Then there was the issue of shelter. At first, everyone stayed in tents. But over time, material was procured – donated at times, scrounged at others – and rudimentary cabins were built. The joke back then was that at Kootenai Christian Camp, when they tell you to make your bed, they give you a hammer and some nails. Did I mention nails? As kids, we straightened a LOT of nails that had been pulled from some other structure so they could be reused to build cabins and other buildings at camp. 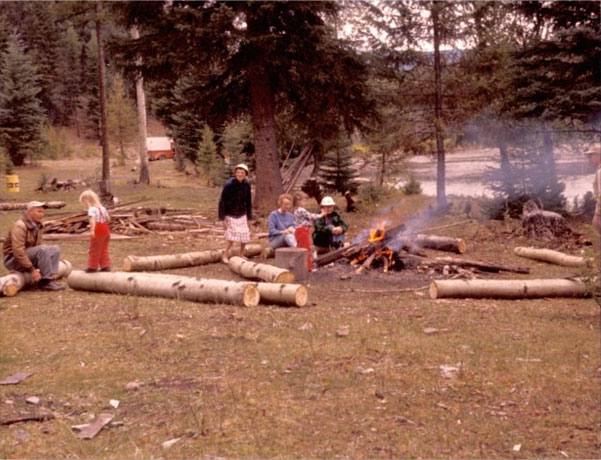 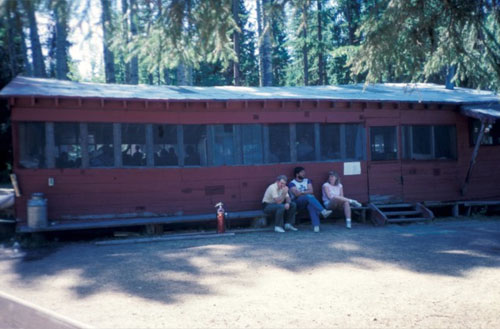 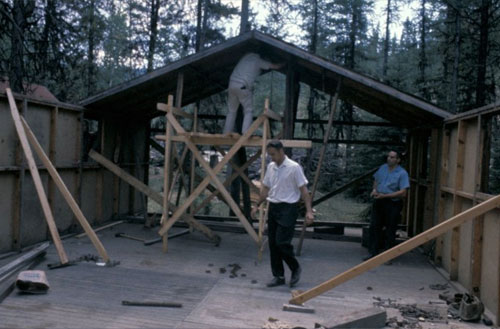 The first dining hall at the campground was elevated somewhat, sitting on pieces of log and other supports. This allowed for material storage underneath, but it also gave the bushy-tailed wood rats (more commonly called “packrats”) a place to live and hide. Attracted by the odors of food, these furry denizens of the woods would sometimes make an appearance in the dining hall during mealtime. Usually, they quickly realized their mistake, disappearing back underneath the building.

In what seems like somewhat of a theme (read about the lodge below), the first chapel building had been acquired from a former CCC campsite. The structure was taken apart in sections as much as possible, transported to Kootenai Christian Camp, and reassembled. It lasted for many years until heavy snows collapsed the roof one winter. The only casualties were an old (REALLY old!) upright piano and a couple of aluminum boats.

Then came the days of the multipurpose building. This building was originally built to replace the old dining hall and to provide additional indoor classroom space. The kitchen and dining area were downstairs, while the upstairs was used for a variety of things. When the old chapel building collapsed, the upstairs was used for evening vespers as well as a rainy-day classroom.

From the beginning of the camp until this time, there was no running water in the camp except for the small creek that flowed down through the middle of the campground (ha). Lake water was pumped into a small storage tank to be used for washing. Restroom facilities were outhouses across the road, and all drinking water had to be hauled. A fresh-water spring right on the edge of the lake was developed and a hand pump set in place. For a short time, water was boated across the lake from the State Park, or trucked in 55 gallon poly barrels. If you’ve ever driven the camp road, you know what a headache this would be. 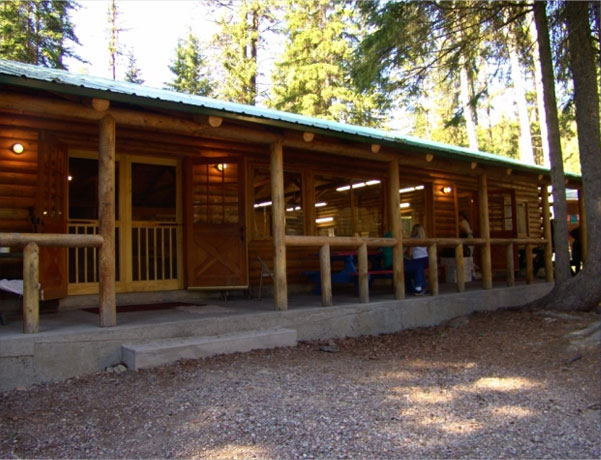 At some point in time after the collapse of the old chapel, an incredible opportunity arose. Down in the Bitterroot valley, near Darby, was a large, log building being used as a dining hall on a guest ranch. The building also featured a walk-in cooler and freezer. The owners had decided they didn’t want the building anymore, so they put an ad in the paper offering it to anyone who could come and dismantle it and haul it away. There was a lot of interest, but it had to be done in a very narrow window of time. Though we were eighth on the list, we were the first ones who could meet the time requirements. Bud Zempel, from the Saint Ignatius Christian Church, oversaw the disassembly, transportation, and reassembly of this building, modifying the floor plan in the process. A few years later, a wonderful couple from Illinois, Gerald and Carolyn Dobbins, volunteered their time and expertise in putting in a full fireplace and chimney at one end of the building. This facility has been a tremendous blessing to the camp program and to all who participate there, and by God’s providence, it has cost the camp very little.

Along the way, two large, two-story cabins were built to be used primarily as dormitories during weeks of youth camp. Each of these building will house many campers and staff. During Family Camp, each building can be turned into a “four-plex”, with two big rooms upstairs and two big rooms downstairs, suitable for entire families to use. Most recently, three more cabins have been built, each of which has two apartments. In each apartment, there are large bunks in the lower part, with a sleeping loft up above. These may be used during Family Camps, or for staff housing during youth weeks.

By this time, a restroom and shower facility had been built which used lake water pumped into a large storage tank located on the hill behind the camp. Then a very generous donation allowed the camp to drill a well right there on the campground. Now the camp has an abundance of good, fresh, potable water for every use. 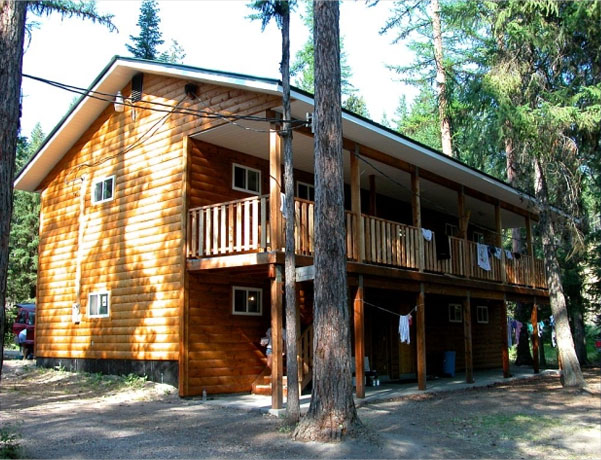 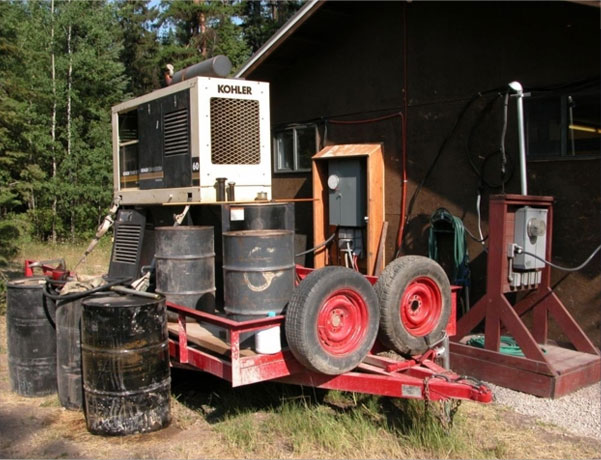 There has never been electricity from a public utility available at the campground, so other means have been used for light and heat. White gas lanterns or propane lanterns have often been used for lighting, and a large propane tank was set to provide fuel for cooking and heating water.

Later, small gasoline-powered generators were used to provide enough electricity for a few incandescent bulbs in the chapel and in the dorms and cabins after dark. When the generator was shut off, it really was “lights out”! The size and type of generator has changed over the years. The camp now uses a 60 KW diesel-powered generator that can power lights in every building as well as the compressor for the walk-in cooler/freezer. The generator is still shut off at night (except during Family Camp) to conserve diesel.

It’s impossible to cover all the history of Kootenai Christian Camp on a single page. Countless campers, teachers, speakers, and other staff have contributed to this wonderful program over the years. Fond memories of fun times at camp are great, but even better are the lives that have been changed by Jesus Christ. This is the first purpose of Kootenai Christian Camp – to introduce people to Jesus. Here, they also get to know Him better, and learn how to follow Him daily, becoming better equipped to faithfully serve Him.

The history of Kootenai Christian Camp is still being written. Please pray for the campers and staff that will attend the camping program this year. Pray that God’s mighty hand would guide and protect all those involved.

We look forward to seeing what God has in store for Kootenai Christian Camp. And we’d love to share this unique camping experience with YOU! 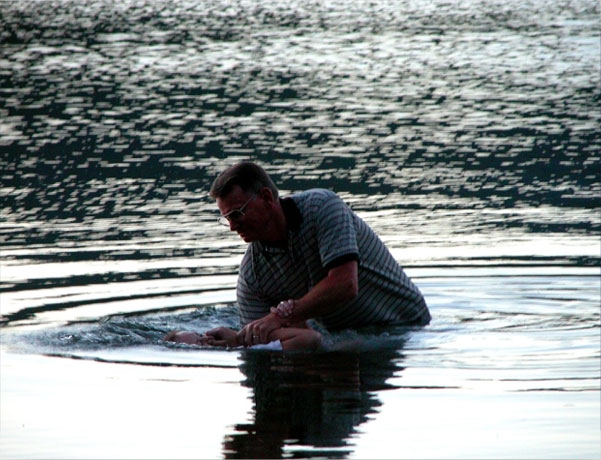 View a Camp Brochure in PDF